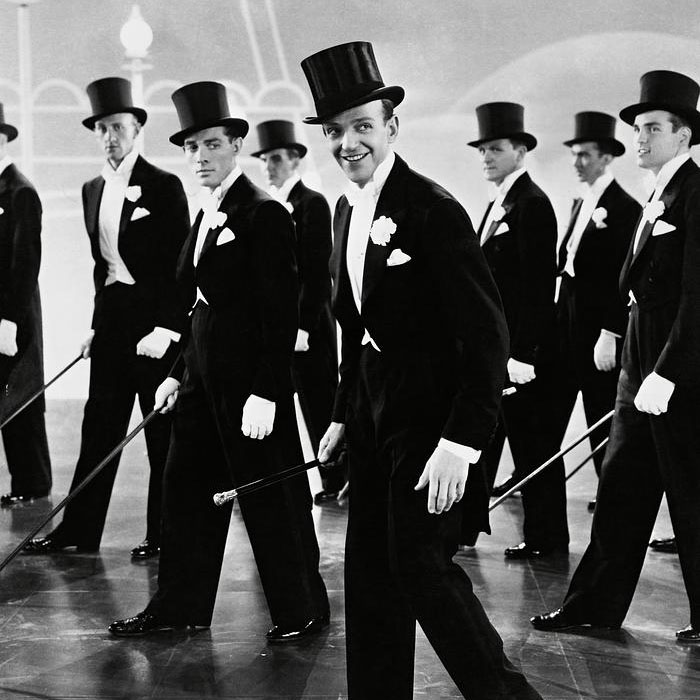 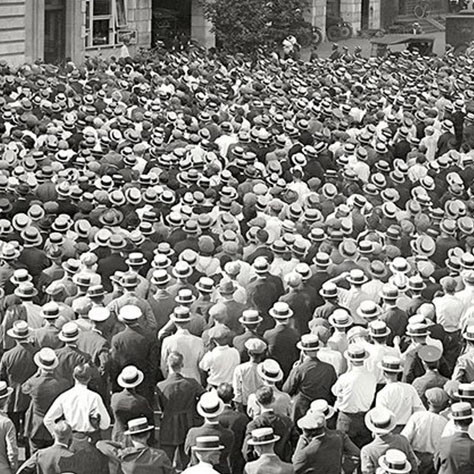 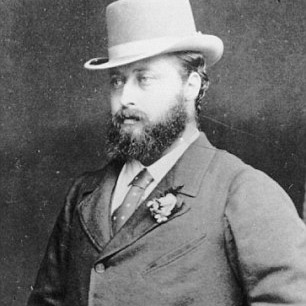 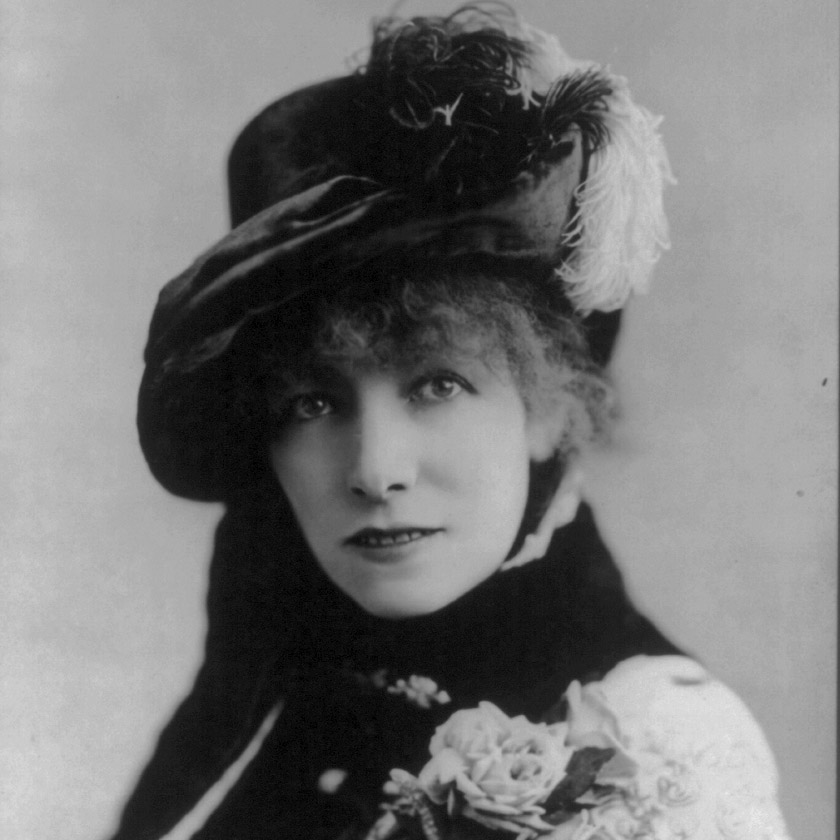 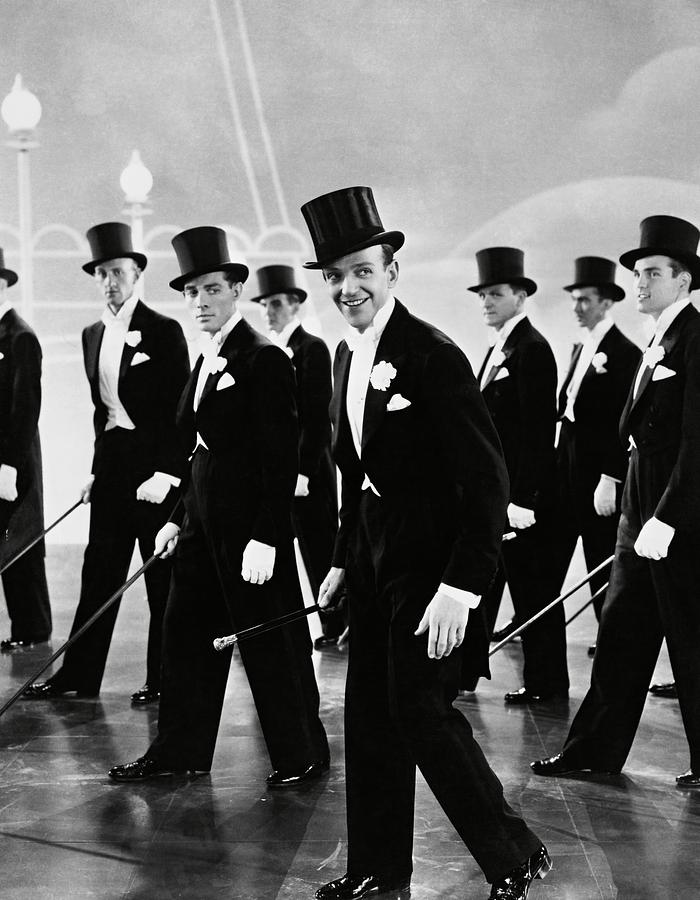 Throughout history, men's fashion has largely emanated from Paris, France. Samples of new Top Hats probably arrived in London from Paris around 1790, to an eager market. On 11 November 1794, a firm of hatters named Dunnage & Larkin registered a UK patent for silk Top Hats. Dunnage regularly advertised their hats in The Times (London) and the new style became all the rage. For the next 20 years, as the whole population fell in love with the tall silk hat, there was massive commercial competition between hatters up and down the country. 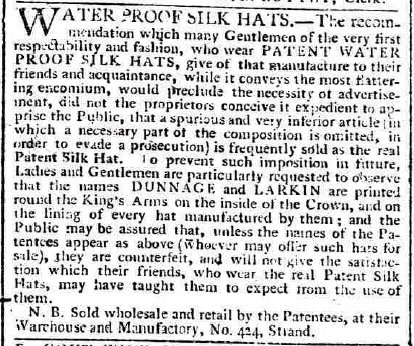 Newspaper ad from Dunnage & Larkin in 1801

However, a hundred years later, British and American newspapers began telling a different story, about a hatter named John Hetherington, who had supposedly been arrested and fined in 1797 (3 years after Dunnage‘a patent) for wearing the first silk Top Hat on the streets of London, scaring horses and causing a riot. Complete rubbish! Yet reputable authors and websites about hats continue to regurgitate it to this day. It never happened. 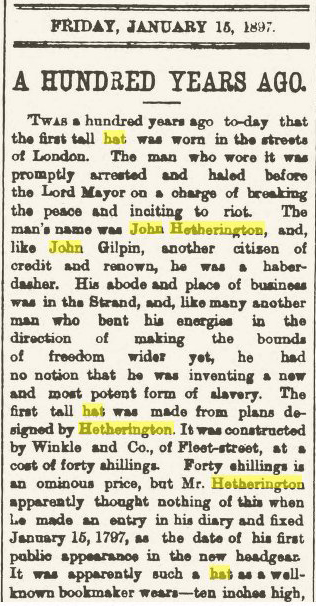 If you search the entire available archives of London newspapers since 1797, as we have done, you will not find a single reference to the Hetherington story until 30 December 1896, when  it first appeared in the London Evening News, 100 years after it was supposed to have happened! Two weeks later, they ran the story again, further embellished, to mark the centenary of the events they described. Over the next few weeks, newspaper after newspaper (but not the Times) seized and republished this nonsensical tale about the early days of Top Hats. In 1904, the same story suddenly began to appear in American newspapers, falsely citing the London Times as the source. And so it went on. Go to websites today (for example, Lock Hatters) and you will still find it!

To clarify: the silk Top Hat was first described by Dunnage in 1794, not by Hetherington in 1797. There was never a hatter called John Hetherington in 18th century London. It is an early example of fake news, propagated by lazy editors who couldn't be bothered to check their facts. 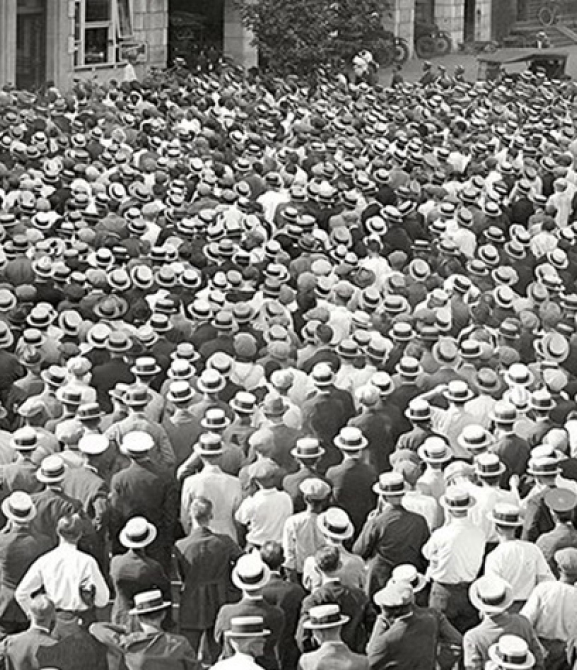 In those days, you had to check your calendar before putting on your hat

It is quite sensible to wear a straw hat in the summer and a felt hat in the winter. However, for a 25 year period from 1900, persuasive marketing techniques coerced American men to buy a new straw hat before May 15 each year. As winter approached, hatters issued a new edict: stop wearing straw and buy a new winter felt, to be worn after September 15. The vast majority of the public willingly complied. The summer streets became a sea of Boaters and Panamas. Bizarrely, any man who dared to wear a straw hat after September 15 was mercilessly ridiculed and his straw hat became a target for "smashing". You could legally knock the hat from the head of a stranger and stamp on it, without being charged with assault or criminal damage. 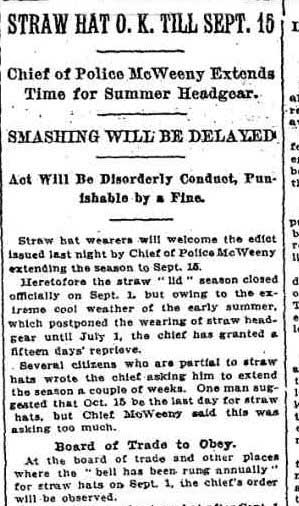 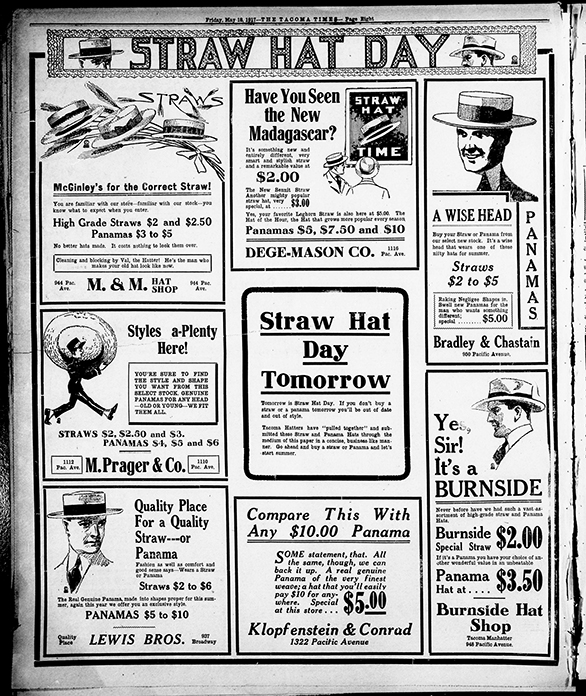 Hat shops were fiercely competitive in Tacoma in 1907 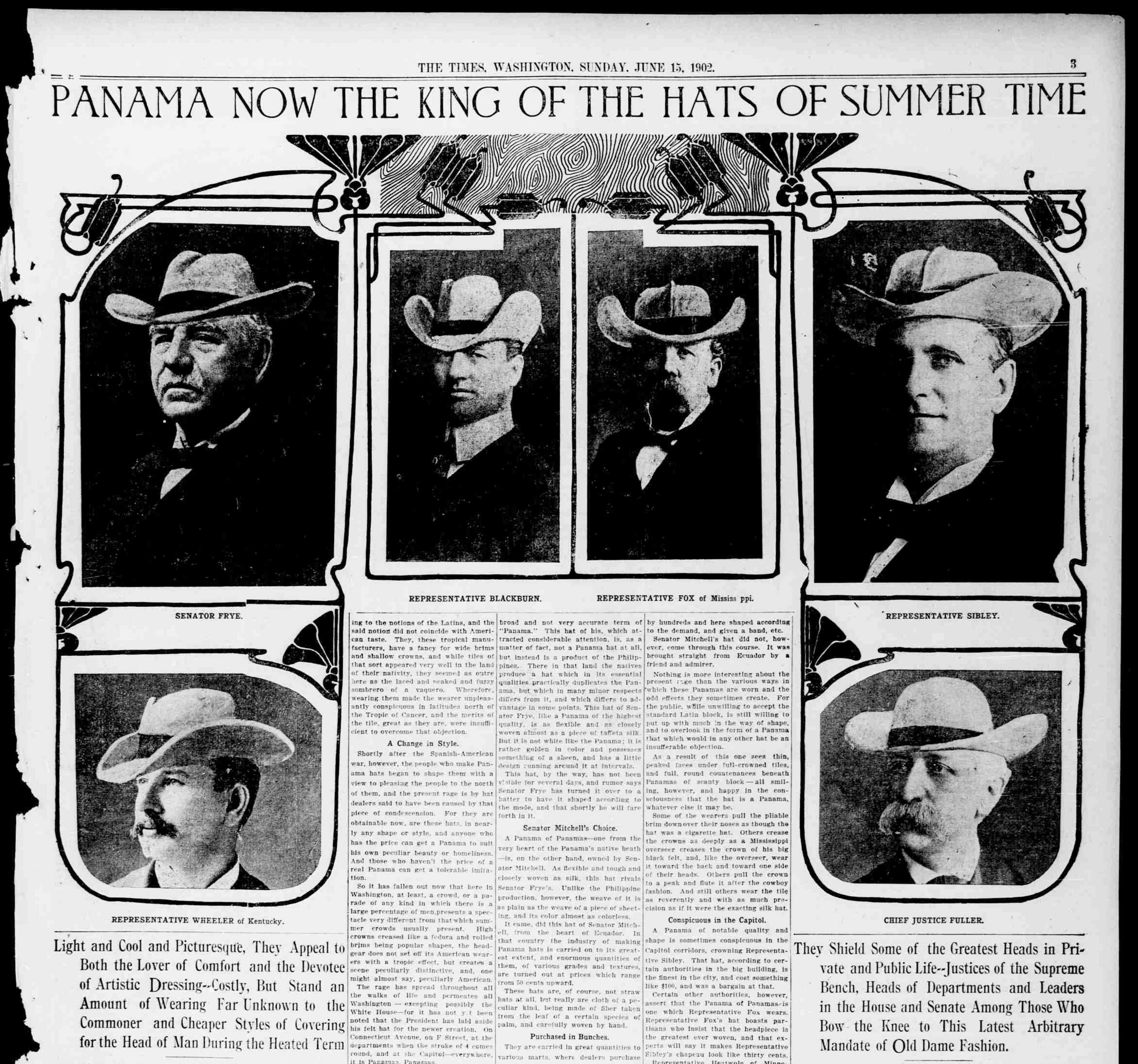 Meanwhile, since 1902, America had fallen head over heels in love with newly imported, finely woven Panama Hats, which had been styled in Europe. The US hat manufacturing industry reacted with some alarm, even suggesting that wearing such imported hats was unpatriotic. They quickly bowed to the inevitable and began customising Panamas into distinctive American shapes. Everyone wore Panamas, from the young and fashion-conscious to ageing politicians. The Panama Fad, as it was called, swept the country. The newspapers flipped between gushing descriptions of how these exotic hats are made and disdainful comments on the idiotic obsession. In 1902, it seemed, everyone (except President Theodore Roosevelt) was wearing a Panama. 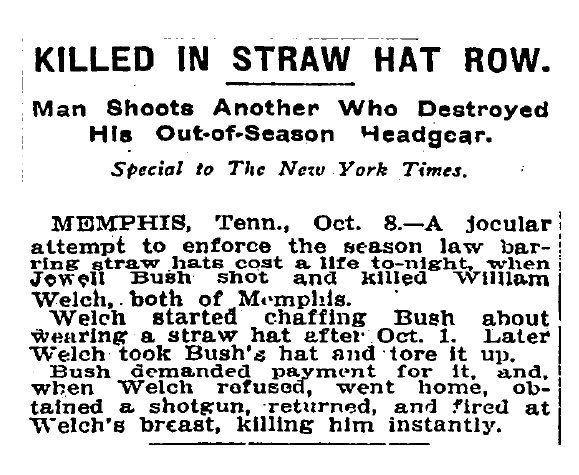 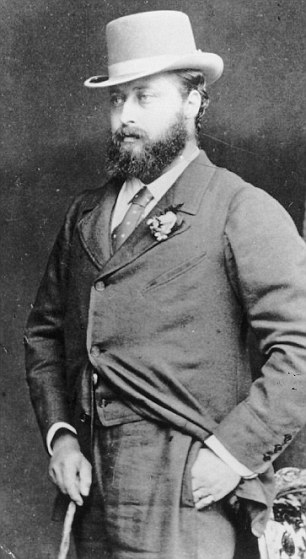 It is generally accepted that the Homburg was created in 1860 by ‘Bertie’, eldest son of Queen Victoria. He regularly visited his European relatives and friends in Bad Homburg, Germany, with its spa and casino. During one visit, the 20 year-old Prince had an idea for a new hat. He went to the Moeckel hat factory and demonstrated what he wanted by taking a traditional, hard Tyrolean hunting hat, removing the feather and punching a dent into the crown. Soon after, he and his friends were all sporting the new style. The “Prince of Wales” hat, later known simply as the “Homburg”, was quickly adopted by fashionable young men across Europe and the US. And with the decline of the Top Hat, the Homburg soon became the prescribed hat for formal evening wear. 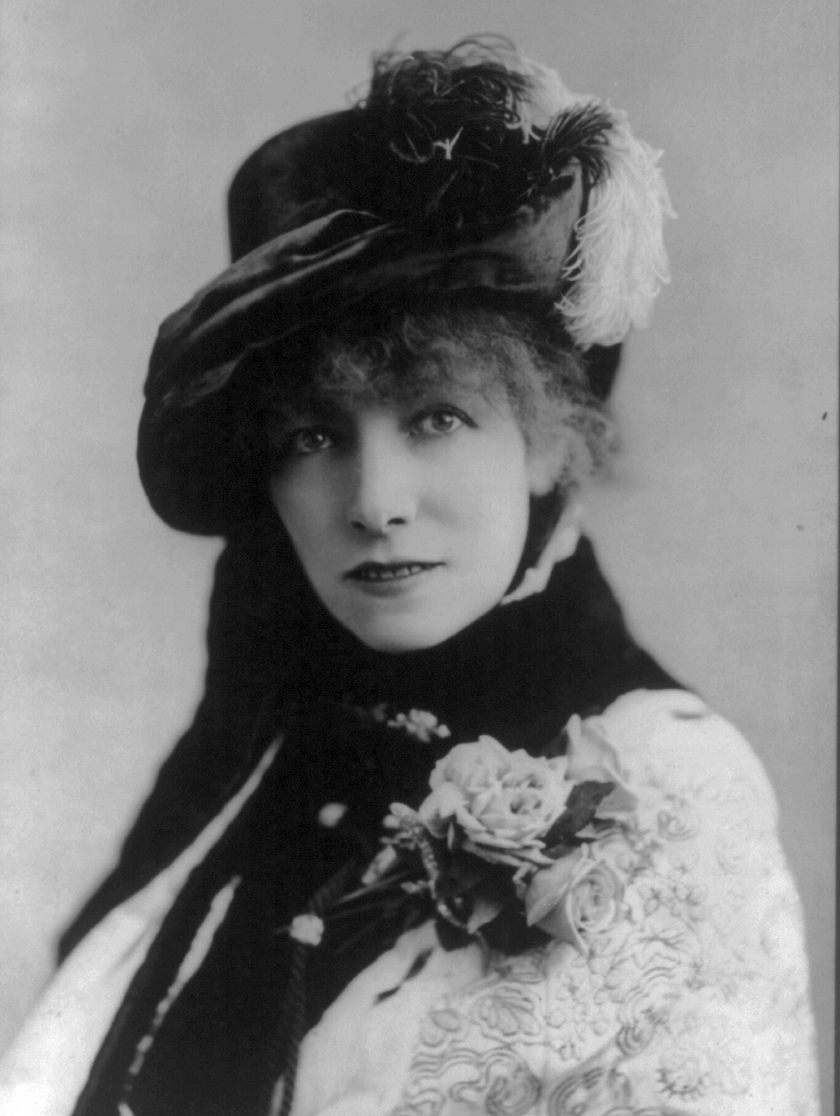 The arrival of the Fedora

Sarah Bernhardt was the world's first superstar actress. When she brought the play Fédora to New York in 1882, her celebrity and her outstanding hat caught America’s imagination. The following year, the Fedora was launched commercially by Knox Hatters.